Tyrone Olson has been skating hard for 26 years now, and according to him, he doesn’t have any plans of slowing down. At 35 years young (I like to say it that way because I am also 35…makes me feel better), Tyrone is still really stoked on skateboarding and is skating as hard as ever. I have always really liked Tyrone’s skating and in the process of doing this interview, I’ve realized that he is a really cool & down-to-earth dude, that just wants to skate, cook, hang out with his friends, and be happy. Tyrone has come full-circle in his life. He lived the crazy professional skateboarder life in California for a bunch of years, having skated for companies such as EVOL, Osiris, and Arcade. Now, Tyrone is back to his roots in Wisconsin, where he is still doing the things that he loves and living his life.

Where are you living? Madison, WI

What’s the story behind the nickname T-Bone? I’ve been called that since I was a little kid, I think my uncle started that.

How did you get hooked up with Westside Skateshop? I met John Montesi in San Diego at the ASR trade show a long time ago. I kicked it off really well with John and Nick Matlin, they have been good friends for many years now. 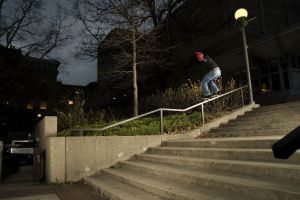 So, you are doing snowboarding lessons these days? Yeah, I just got a job teaching snowboarding at a Ski Resort call Tyrol Basin here in WI, it’s about 20 minutes outside of Madison. This is my first year, so it should be real fun.

You lived in Salt Lake City for a little while, did you do a lot of snowboarding there? Yeah, I lived in SLC for about 2 years. I worked at Snow Bird and the Canyons Ski Resort as a cook. So yeah, everyday I was riding. I got on the game show Jeopardy while I was living there doing a snowboarding trick for their show, kind of cool! 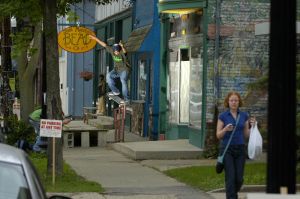 You went to culinary school several years ago and you now work as a catering chef right? Yes, I work at the Alliant Energy Center setting up banquets and shows. The company I work for is called Centerplate Catering.

Tell me about the clothing line that you have in the works. A friend of mine that has a shop called No Comply is down to get something started. It’s not up and running yet, but soon.

I know you like skating in Chicago, how often do you get down there? Well, when it’s nice out, every other weekend.

Did you skate The Turf when you were growing up? For sure! I used to skate there every weekend with Dave Mayhew, that place was the bomb. Save the Turf.

What’s up with The Turf, are they going to be able to save it? I hope so! Maybe Tony Hawk would help to save it…please Tony we need your help.

What do you have planned for the future? Well, just keep doing what I love and stay in the game. I’ve been skateboarding for 26 years now and I’m never going to stop. My plan is to just be happy and take care of business, that’s about it.

Shout-Out’s? Yeah, I would like to thank my girlfriend Ashley and Cory for taking photos, Blake, Purea, Jack, Nick, Shane, and Channing for filming. Shout-out to all my Appleton, Oshkosh, Milwaukee, and Madison friends,WESTSIDE Skateshop, Last Resort Skateshop and Wheels, Dave Mayhew and all of my Cali friends. Also, I  would like to thank the Pipe Skatepark, Cream City Skatepark, 4 Seasons Skatepark and Joe Booth from stillnotsponsored.com. Finally, last but definitely not least, big shout-out to Bart and to Frankie Hill from Legion Skateboards! To all of the skateboarders and fans that have always been down for T-bone, thanks! Skate or Die!

This entry was posted on December 19, 2010 by Nick Nicks. It was filed under Interviews, Skateboarding and was tagged with Skateboarding, The Legion Skateboards, Tyrone Olson.