Check out the footage of last week’s Biggest POP & Best Firecracker Variation Contest @ Schoolyard Skatepark in St. Petersburg. Westside Skateshop came through big in the Biggest POP category with Yonis Molina taking the Biggest Switch Ollie and Biggest Kickflip titles, and Jimmy Mastrocolo won the Biggest Ollie. Southern Boarder team rider Austin McCahan lit the place up with the Best Firecracker Variation. As usual, a good time was had by all…what better way to show your love for America than by skateboarding! Make sure to check the Upcoming Events page on the mag regularly for more events like this at Schoolyard Skatepark and all over Florida. 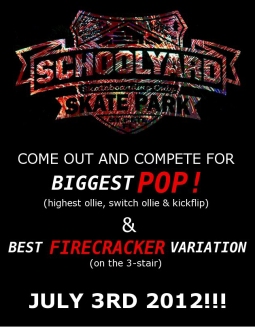