Cam Simon is an independent videographer out of the Tampa Bay area that brought you The FLA Story and The FLA Story 2 . He has a killer little demo reel for your viewing pleasure here. 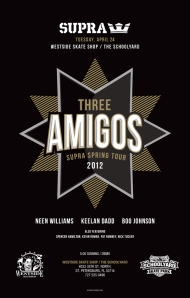 Filmed and Edited by Tim Simmons.

Billy Marks, Tom Asta, Chico Brenes, Rodrigo TX, Felipe Gustavo, and Tommy Sandoval rolled through Florida on the LRG 2012 Florida Tour last month signing autographs and doing demos. Check the footage of them shredding parks all over the state including: P(a)yne Skatepark in Sarasota, Schoolyard Skatepark in St. Petersburg, and the Skatepark of Tampa…among others.

Here is sick recap of the shredding that went down last Sunday at Future 6 Clothing’s Diamondz 2011 Mini Ramp Skate Comp at Club Ember in downtown Orlando. Of course the Goat Ramp was there to make it all possible. Filmed and Edited by TJ Gaskill.

Plan B did a demo at the Vans Skatepark in Orlando last Friday. PJ Ladd, Ryan Sheckler, and Trent McClung were gettin’ it done. Somehow Kyle Edge managed to put together this little montage despite the ridiculous “no camera” rules.

Filmed and Edited by Kyle Edge.

Plan B Demo & Signing in Orlando This Weekend

The Plan B team consisting of: Danny Way, Colin McKay, Torey Pudwill, PJ Ladd, and Ryan Sheckler, are doing a demo at Vans Skatepark in Orlando this Friday, September 9th @ 7 pm. Then, Saturday, the 10th, there will be an autograph signing at the Element store in Universal City Walk. Not quite sure about the Element store autograph signing thing, but, watching these dudes destroy Vans park would be sick. Especially if Danny and Colin turn it up on that vert ramp!

Birdhouse Skateboards kicked off their MIA to NYC tour at Westwind Skatepark in Miami over the weekend. Take a look at this sick little montage of the event. 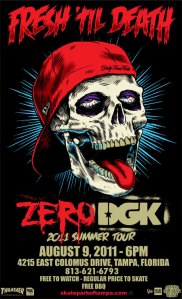 I remember going to all-nighters at Astro Skate in Tarpon Springs a long time ago when I was a kid. Astro Skate is a roller skating rink, but they have a couple of ramps and boxes and a couple of rails that they pull out once in a while and let people skate. Here’s a clip of John Montesi and some of the Westside Skateshop team doing a little demo at Astro. Filmed and Edited by Tim Simmons

The Quiksilver presents Birdhouse Skateboards MIAtoNYC Tour powered by Tech Deck gets underway at West Wind Skatepark in Miami on August 21st. Tony Hawk, Willy Santos, Kevin Staab, along with Aaron “Jaws” Homoki, David Loy, Riley Hawk and the rest of the Birdhouse crew will also be making stops at the Skatepark of Tampa on the 22nd and Kona Skatepark on the 23rd, before heading up the east coast. The full tour schedule, along with a promo video are below.

The Underground Skateshop crew put on a killer little demo last night at Realize Bradenton’s Party on the Plaza. Will Reinhardt set up his mobile skatepark in the parking garage of the First Bank building. A couple hundred people watched from the level above as Matt Flanagan, Matt Mellquist, Shannon Quiming, Jeremy Bealer, Cory Wash, Michael Andruzzi, Jake Blue, Josh Mitchell, Jimmy Sanchez, and the rest of the Underground family put down trick after trick for 30 minutes. The people in Bradenton seem to be very supportive of the skateboarding scene and are looking forward to the new Bradenton Riverwalk Skatepark that should be completed in 2012. Big shout-outs to Will Reinhardt and the Underground Skateshop crew and Johnette Isham with Realize Bradenton for making the demo a reality. 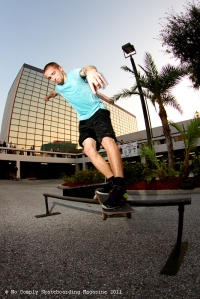 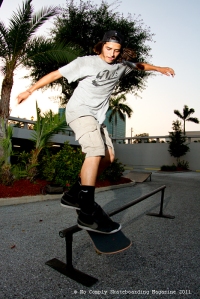 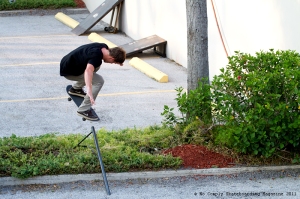 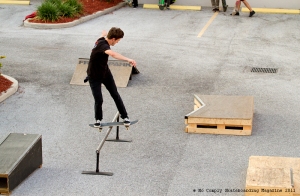 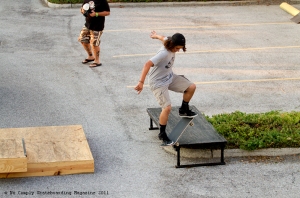 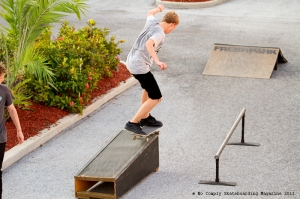 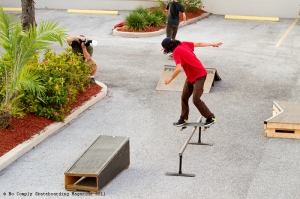 This Saturday, May 21st, get to downtown Bradenton for this! Realize Bradenton Presents: Party On The Plaza. Party On The Plaza is an outdoor evening of libations, food, live music by “Bradenton’s Own band” Have Gun Will Travel, skateboarding demos by the Underground Skate Shop Team, and much, much more! Click here for all of the details and to purchase tickets. 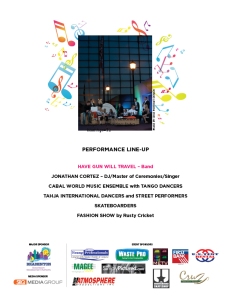 Have Gun, Will Travel – “Salad Days”:

Next Monday, May 9th at P(a)yne Skate Park in Sarasota…Bones Demo! DO NOT MISS THIS ONE!

To Do This Weekend

There is a bunch of stuff going on this weekend: Founder’s Day Goat Ramp Jam at Catalyst Melbourne, Butter Bench Contest at The Shop in Hollywood, Florida, and 2 For 2: 2 Artists & 2 Bands at The Bricks in Ybor. Be sure to check the “Florida Skateboarding Events” and “Music & Art” Pages frequently, as they are constantly being updated with all of the upcoming events!

Here are a couple of sequences of Jake “Poptart” Welch shredding the Goat Ramp last Saturday in Sarasota at the Take Over.
Click on image to view sequence:

Here is footage courtesy of Colin Clark and the Skatepark of Tampa of the ripping that took place this past Saturday at the Spring Roll All Ages Contest. The contest was presented by DVS and Matix and Luis Tolentino, Marty Murowski, Brandon Biebel, and Daewon Song were there hanging out and skating Friday evening and Saturday. Needless to say, everyone was tripping over themselves to watch Daewon skate. Anyway, looks like it was a great time with plenty of shredding going on. Also, be sure to check the full results here and some photos and sequences here.

Goat Ramp Demo at the Take Over

The Goat Ramp demo at the Take Over in Sarasota on Saturday was sick! Such good times, good vibes, and the skateboarding was next-level! Big shout-outs to the Demon Seed Skateboards crew, the P(a)yne Skate Park crew, and everybody else that showed up to shred and have a good time! See you guys next weekend at the 3rd Annual Ghetto Bowl Bash!
Click photo to view large:

Keith Baldassare, Judo over the hip.

Poptart, Frontside Air over the hip. 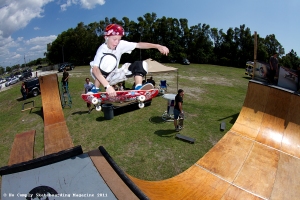 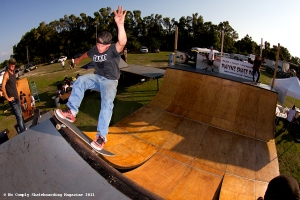 Mat Call, Oliie up to Smith. 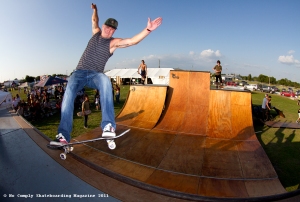 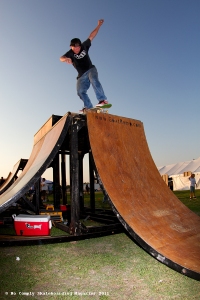 Mat Call, Ollie to Backside Disaster over the hip.

BBQ, Ollie from Low to High with a tail tap. 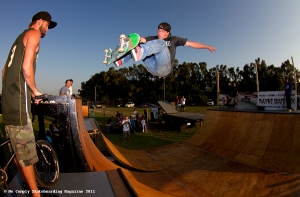 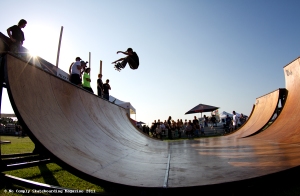 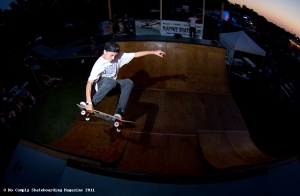 TJ Sparks, Ollie in from High to Low.

The Bones Wheels Team is going to be shredding P(a)yne Skate Park in Sarasota on Monday, May 9th! Chad Bartie, Kevin Kowalski, Brad Mclain, Steven Reeves, Ben Hatchell, and Ben Raybourn have been confirmed! BBQ, Product Toss, Shredding…you know how they do it down there in Sarasota! Stay tuned here for all of the details.

If you happen to find yourself in Daytona Beach tomorrow, defintitely make sure to check out the Goat Ramp Demo at Maui Nix! Demon Seeders Mat Call, Keith Baldassare, and Nick Murphy will be there planting their Demon Seeds as usual. FREE BBQ, Shredding Demo, Product Toss, and the legendary Tony Alva will be hanging out!