The latest SPoT On from the Skatepark of Tampa features Ex-Pro, O.G. Tampa local, and MIA Skateshop owner Ed Selego.

MIA Skate Shop and Coral Morphologic are psyched to announce the release of a series of skateboard decks featuring the photography of three different fluorescent corals that call Miami their home. The collaboration is a logical extension of Coral Morphologic’s view of Miami as the Coral City. A city whose cement buildings are metaphorical monuments to the fossilized remains of an ancient coral reef that once ran through it. Skaters will now be able to skate through a city of coral (recycled as concrete) on boards that reflect its bio-geologic past, present, and future. Miami, a city where vertebrate and invertebrate life-forms are forever bonded through calcium carbonate. Calcium carbonate skeletons that were once enveloped with fluorescent coral tissue now form the foundation for a neon metropolis that mirrors its coral reefs. A metropolis with an Atlantean destiny, where corals will one day recolonize the streets and buildings as their own.

Here is footage of the 2013 Clash of the Crews Presented by Vans @ SPoT. Teams from all over Florida and beyond competed for the fame and ($1,000) fortune. In the end, the Graffiti Skate Zone team from Palm Bay, Florida took home 1st place. The final results and some photos can be found here.

RIDE Channel takes you on a skate-tour of Miami with Mr. Miami himself, Joel Meinholz.

Filmed and Edited by Josh Stewart

Check this killer footage of the *AMMO* X MIA Collab and the Bum Rush The Spot event from a couple weekends ago down in Miami.

MIA’s “Clash of the Crews” Roadtrip

MIA Skateshop put together a sick little edit of their road-trip to Tampa for the Clash of the Crews at SPoT last month. Looks like they managed to fit in a killer session at P(A)yne Skatepark in Sarasota as well. Check it…

When I called Matt a few nights ago to interview him for this Mind’s Eye piece, I had a list of questions that I was prepared to ask him. Most of the questions were pretty standard, but I figured that they would be good starting points that would lead to questions that I hadn’t thought of. Anyway, when Matt answered the phone, he told me that he had just put his daughter down to sleep and that he would have to be somewhat quiet. This immediately led into an organic conversation that lasted over 30 minutes, which, after I hung up the phone, I realized I had never asked him a single one of those questions. So, that being said, I will give you some background information on Matt and cover some of what we talked about. In the end though, as is the sign of any passionate and talented artist, I will let Matt’s work speak for itself.

Matt Roy is a snow skier from New Hampshire, snow skiing he says was his first true love. When Matt was a kid he wanted to make ski movies, so he mounted an old VHS video camera to his helmet…you know, the ones that weigh like 25 lbs!  Obviously Matt knew from day one that you have to do what you have to do to get the shot. When Matt was about 8 or 9 he discovered skateboarding, he skated until he was about 15 and quit. It was also in this period of time that Matt picked up his mom’s Pentax K-1000 for the first time and started shooting photos of his friends. Unfortunately, all the film from that era is missing, which seems to be something that happens to all of us at one point in our lives.

Anyway, fast forward several years, Matt leaves the northeast for the tropical climate of Miami, where he eventually begins working as a personal trainer. Matt is still a full-time personal trainer, which he is also very passionate about. But about 5 years ago Matt started wakeboarding and also went in to MIA Skateshop and bought a new setup to start skateboarding again. I guess not being able to snow ski as much as he wanted to was starting to get to him.

Apparently the wakeboarding and skateboarding also sparked Matt’s photographic fire. He bought a 20D and started taking it wakeboarding to shoot photos for trade on getting pulled behind the boat, and he also started taking it to the old MIA Skate Park (R.I.P.) to shoot. Eventually, Matt started hanging out with and shooting photos of Abe Bethel and Rene Perez at the park, which led to countless hours of watching online tutorials, experimenting, and a ton of trial and error…photography was consuming him.

As you can see from the photos below, all that time and passion has translated into some amazing photography. Matt’s skateboarding photography has been featured in Focus Skate Mag, Lowcard Mag, and FTK Mag (snagged the cover shot in the most recent issue). Matt says that he doesn’t want to make a career of photography (for now at least), he is focused on training, being a dad, and juggling a busy schedule, although he said that he is getting more and more phone calls to go shoot all the time. This also allows him to focus on shooting subject matter that he is comfortable with.

Matt shoots and skates with the MIA Skateshop team and other Miami locals on a regular basis, which keeps him involved in skateboarding. Make sure to key your eyes peeled, lots of good things to come. In the meantime, enjoy this gallery of photos, all of which really epitomize the Miami skateboarding scene. – Nicks

Check out all of Matt’s work at Matt Roy Photography

It’s been a while since we did a Time Capsule Thursdays feature, so when I stumbled upon this clip recently I figured it was time to do a new one. This is a part that Ed and Matt Selego shared in an independent film, FM2, that was produced, filmed, and edited by Rob Hoovis about 10 years ago. Rob came up skating in the Ft. Myers scene with a crew that consisted of Matt Milligan, Allen Russell, Elissa Steamer, and others. Ed and Matt Selego were from Tampa, but the Tampa and Ft. Myers crews spent a lot of time skating together. Enjoy.

Josh Stewart just released this alternate edit of Ed Selego’s part in his most recent film “Welcome To MIA”. 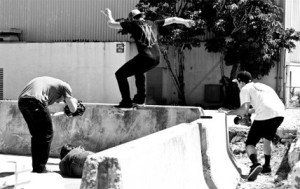 Now that the “Welcome to MIA” premiers are all over and the film is available online & in stores worldwide, take a look at Making “Welcome to MIA”.  Josh Stewart recently had a chance to catch up with Ben Gore, Joel Meinholz, Brian DeLatorre, Ed Selego, and Forrest Kirby to document their thoughts on what the process of filming for “Welcome to MIA” was like. The interview is sick and the photography, courtesy of Miami photographer Matt Roy, is amazing. Check it out.

Well, after missing both of the premiers at The Bricks recently, I finally managed to see Josh Stewart’s latest film “Welcome to MIA”. It was no surprise to me that the film is an instant classic and is already a must have for every skateboarders’ collection. But, with the Cigar City, Rising, the Static series, F.O.R.E and Friends (filmed only), and Adio’s One Step Beyond in his repertoire, I have come to expect nothing less than raw brilliance from Stewart.

Josh Stewart is originally from Tampa and with videos such as the aforementioned Cigar City, Rising, and the Static series, he helped put Tampa on the skateboarding map. So, when longtime friends and MIA Skateshop co-owners Ed Selego and Chris Williams wanted to do a shop video and finally put Miami in its long deserved spot on the skateboarding map, Josh Stewart was definitely their guy. Stewart was in the middle of filming for Static IV (Yep, Static IV), but spent the majority of the last two years completing “Welcome to MIA”.

“Welcome to MIA” gets started with a full part from “Mr. Miami” himself, Joel Meinholz. I was so stoked to see a full length part from Joel, footage of him is so hard to come by. Joel’s skating is sick and his style is unique and refreshing! Ed Selego, Forrest Kirby, Danny Fuenzalida, Paul DeOliveira, Ben Gore, and Brian DeLatorre all came through with super-good full parts also. I hadn’t really seen a whole lot of footage of Brian DeLatorre before “Welcome to MIA”, and let me just say that, his skating blew my mind! Super-Fast, Super-Smooth…keep your eye on this dude…he killed it! “Welcome to MIA” also features montages of footage from guys like Jahmal Williams, Cody Lucas, Luis Perez, Rene Perez, Chris Williams, and the rest of the MIA family and friends network!

The skating is as raw and real and diverse as the lineup of skaters. The spots are also refreshing and new, with just the right amount of crustiness we are used to here in Florida. The top-notch, signature filming technique that has become Josh Stewart’s own, coupled with the creative soundtrack, puts the final touches on another masterpiece. Well done!

Pick up a copy of “Welcome to MIA” through Josh Stewart’s brainchild Theories of Atlantis or MIA Skateshop…it will be the best $12.95 you ever spend.

In the meantime, check out the trailer: