National Go Skateboarding Day takes place on June 21st every year and it’s the day for Skateboarders across the globe to celebrate what they’re passionate about most. It all started in 2004 and has been an ongoing holiday where skaters across the world drop everything and just focus on what they love skateboarding.

Team Pain Skate Parks just recently completed a restoration of the 12 year old Orlando Skate Park. Adding a few new obstacles, fresh paint, and a compete revamp of the big bowl in the back end of the park. Complete with brand new tedder stone pool coping and tile, not to mention the strenuous task of demoing the previous hip and reconstructing a brand new hip that opens up the bowl and allows for more flow and lines.  Check out the recap above to see some of Orlando’s best tearing up their newly renovated skate park. 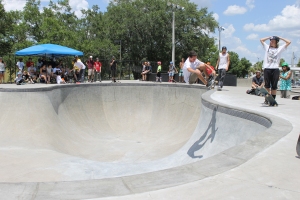 Filmed and Edited by Nick Whitney.

Vans Skatepark in Orlando is closing it’s doors for good this Saturday, January 21st, after a 10 year run. As a gift to the skateboarding scene in Orlando that has supported them all these years, Vans has collaborated with Team Pain to design two concrete obstacles that will be installed and ready to shred this week at Orlando Skate Park.

Saturday, November 19th, was the Vitamin Water King of Crete at OSP in Orlando, FL. Everybody was killing it…East Coasters & West Coasters…Groms from 11 years old all the way up to Masters in their late 40’s and one that is even 50. It was a perfect day for some concrete shredding and in the end it was Mike Peterson, Sergie Ventura, Alex Sorgente, and Nick Wallace all taking first place in their respective divisions. To end the day off, everybody headed down the road to Skatebar for a couple of cold ones and the premiere of Lifeblood Skateboards’ first full-length video We Must Bleed.  Make sure to check out all of the final results and photographs below. Also, be sure to check out all of the video footage here. Looking forward to doing it again next year!

All Photographs © No Comply Skateboard Mag 2011

Keith Baldassare, Bodyjar in the rain.

In case you were wondering…Poptart kills it! Demon Seed Skateboards \m/

Shaun Ross was killing it all day at the Vitamin Water King of Crete at Orlando Skatepark. Frontside Boneless. Photo_Nicks. More photos and coverage coming tomorrow.

Headed to the King of Crete at Orlando Skatepark today…should be a barnburner! See you there. 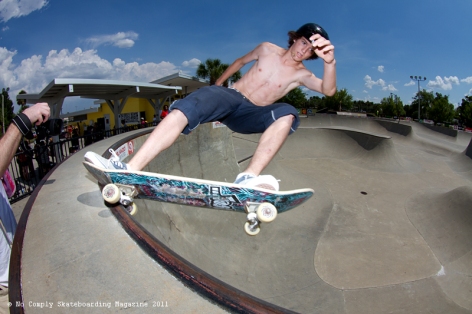 Jay Meyer sent over this sick montage of Orlando Skate Park and Vendetta Griptape rider Jordan Armenta gettin’ to work on some Florida spots. How does this dude not have a board sponsor? Filmed and Edited by Jay Meyer

Last Saturday was the Vans Warped Tour Qualifiers Mini-Ramp Contest at the one-and-only Orlando Skate Park. I finally did more skating than shooting for once, but I still managed to come away with several good photos and a couple of sequences. As usual, everybody was killing it and the vibe was good! Thanks again to Johnny and staff at OSP for everything that you guys do, to the Demon Seed crew for bringing the gnar, and to everybody that came out. See you guys soon! – Nicks 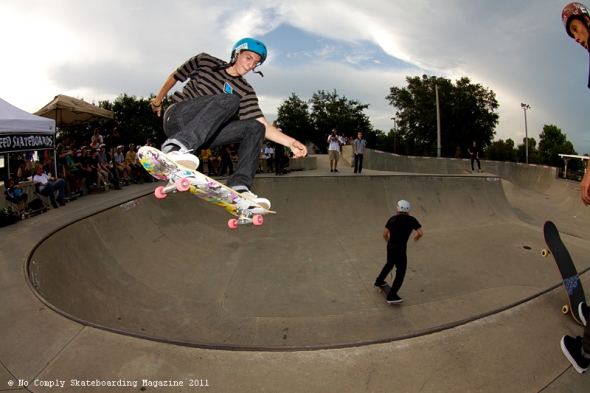 Check out Mike Edwards sick angle of it! 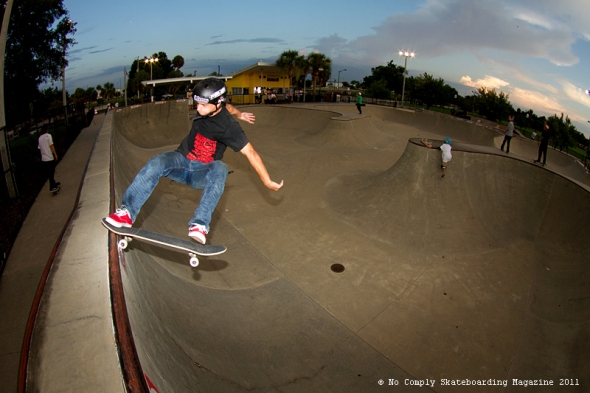 Keith Baldassare, Crailslide Revert through the corner of the vert wall.

Mat Call, Fakie to Pivot to Frontside Grab Pull-In to Fakie on the vert wall. 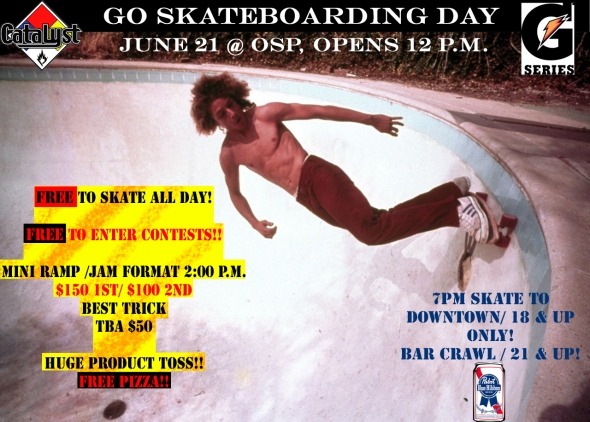 GO SKATEBOARDING DAY is next Tuesday, June 21st, and they are doing it up right in Orlando! The celebration gets under way at Orlando Skate Park (OSP), where it is FREE to skate all day long, and it is also FREE to enter the “Mini Ramp” and “Best Trick” contests sponsored by USS Catalyst and Gatorade! At 7 pm there is a “Go Skateboarding Day Orlando” Event, including a “Skate to Downtown” for 18 & Up, and a “Bar Crawl” for 21 & Up! No Comply Skateboarding Magazine will be on hand all day documenting the festivities! See you there!

The Concrete Showdown Contest at Orlando Skate Park on Saturday went off! Several different teams competed in the blistering heat all afternoon for cash and prizes. Each team was given two runs; a 5 minute run and a 3 minute run. During each run, all 5 or 6 riders on the team skated at the same time, and could use the flow course, the pool, the quarterpipe, or the pyramid/ ledge/ stair features. After all of the first two runs were over, the judges narrowed the field down to 3 teams to compete in the finals. These 3 teams were each given one final 3 minute run. Everybody was shredding all day long, but in the end it was the OSP team that took first place. Thanks to Johnny and the staff at OSP for all of their hard work that went into making the contest happen, to all of the sponsors, to all of the teams that came out to skate, and to everybody that came to hang out and watch. See you guys at the next one!
Final Results: 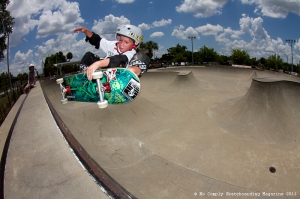 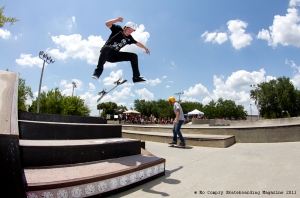 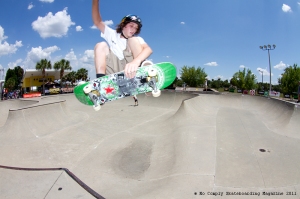 Evan, Slob over the hip.

Steven Usma, Blasting Backside out of the vert corner to flat.

Nick Murphy, Backside 5-0 to fakie over the pizza. Click image to view sequence.

After the Concrete Showdown Contest, I headed over to the Metro Skateboard Academy with the Demon Seed Crew and the Piñeiro brothers for what turned into a killer private session in the bowl. If you have not skated this bowl, you need to check it out! What a day! – Nicks. 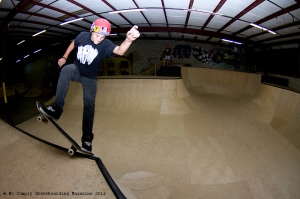 Poptart, Frontside Nosegrind over the hip. 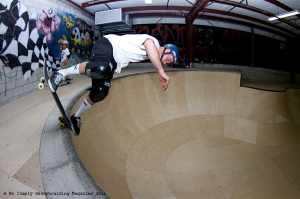 Congratulations to Jake “Poptart” Welch, Nick Murphy, and Isaac Crawford for finishing 1st, 2nd, and 3rd, respectively at the April Pools Day Contest at Orlando Skate Park on Saturday. The weather was perfect and everybody was killing it! Check back for the full results later, but for now, check out the shredding that was doing down! All Photos_Nick Nicks.

Nick Murphy, Alley-Oop Boneless Into the Pool. Click on image to view sequence.

Keith Baldassare, Over the Hip to Frontside 5-0. 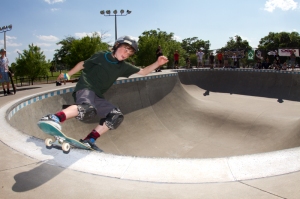 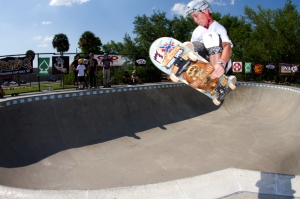 Isaac Crawford, Frontside Air over the Hip from Deep to Shallow. 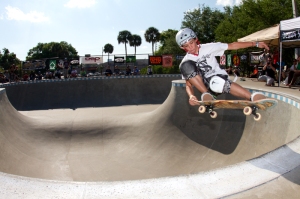 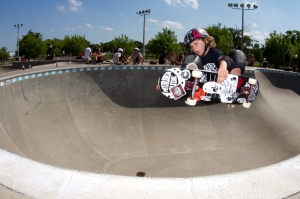 Here’s a short clip from Demon Seed Skateboards of the ripping that was going on yesterday at the April Pools Day contest at Orlando Skate Park. Check back first thing tomorrow morning for a ton of photos of the contest!

Here’s a little taste of the shredding that went down in Orlando today. Look for all of the coverage from “April Pools Day” at OSP on Monday.

Keith Baldassare, Over the Hip to Frontside 5-0, OSP.

Tomorrow is April Fools Day, but Saturday is April POOLS Day at Orlando Skatepark! See you there!

Just in case you missed this. This is so gnarly…I’ve been watching a lot of clips in the last couple of weeks of tricks that have been done at this spot, and this is definitely one of the gnarliest! Nick Murphy rips!

Orlando Skate Park (OSP) is having a pool skating contest! April Pools Day is April 2nd…shredding in the pool, live music courtesy of DJ Atom Tobias, prizes for the winners…sounds good! Get signed up or come skate the park and stick around and watch the contest. Click the flier to enlarge for all of the details.

Nick Murphy, Bluntslide through the corner on the infamous Maitland Brick Quarters. Click on the image above to see the Sequence! 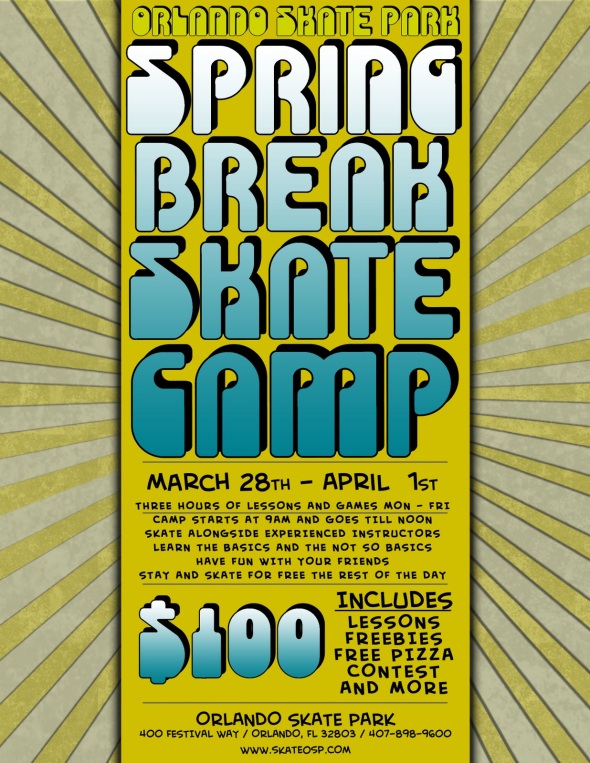 Get signed up for Orlando Skate Park’s Spring Break Skate Camp. A whole week of skating, lessons, pizza, prizes, and contests for $100…sounds like a great time!