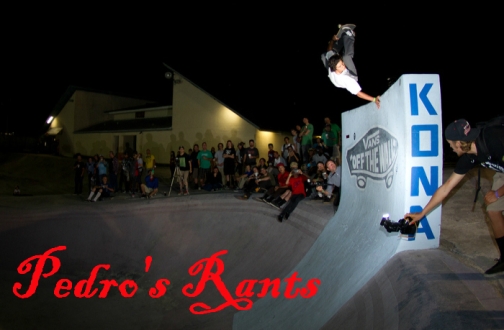 I have been skating for quite some time now and most don’t know that I have a sister who also skates. Fabiana picked up skating maybe a year after I did and in no way did I help her. That didn’t stop her from progressing as fast as she did; and to make it more challenging, she never had a skate crew like most do. It was tough for her to gain acceptance at the local skate park because nobody really paid much attention because she was a girl and nobody took her serious. Then again, it was just another challenge.

Overcoming the gender difference of what it took to be skateboarder made her excel and rise above her peers and it really enhanced her style along with her bag of tricks. As soon as she began winning contest, she began catching the eyes of the local shop Island Water Sports. Not only did they acknowledge her potential she would have on the skate team, but the influence she would have on the other girls who wanted to be a skateboarder. It was really important for her to gain the respect she has now from the skate community here and now that skating is building a bigger appeal to other women, I hope that they can look up at my sister as an inspiration to seek out a passion in any sport dominated by men . Because no matter how the world may view women in sports, as long as there is a love for it, it is worth pursuing. – Pedro Delfino.