Global Skateboard Media has a new Moments on their site featuring Miami-based photographer Matt Roy. Matt shoots some really amazing images and has had the Miami scene covered single-handedly for quite a while now. Take a look…

When I called Matt a few nights ago to interview him for this Mind’s Eye piece, I had a list of questions that I was prepared to ask him. Most of the questions were pretty standard, but I figured that they would be good starting points that would lead to questions that I hadn’t thought of. Anyway, when Matt answered the phone, he told me that he had just put his daughter down to sleep and that he would have to be somewhat quiet. This immediately led into an organic conversation that lasted over 30 minutes, which, after I hung up the phone, I realized I had never asked him a single one of those questions. So, that being said, I will give you some background information on Matt and cover some of what we talked about. In the end though, as is the sign of any passionate and talented artist, I will let Matt’s work speak for itself.

Matt Roy is a snow skier from New Hampshire, snow skiing he says was his first true love. When Matt was a kid he wanted to make ski movies, so he mounted an old VHS video camera to his helmet…you know, the ones that weigh like 25 lbs!  Obviously Matt knew from day one that you have to do what you have to do to get the shot. When Matt was about 8 or 9 he discovered skateboarding, he skated until he was about 15 and quit. It was also in this period of time that Matt picked up his mom’s Pentax K-1000 for the first time and started shooting photos of his friends. Unfortunately, all the film from that era is missing, which seems to be something that happens to all of us at one point in our lives.

Anyway, fast forward several years, Matt leaves the northeast for the tropical climate of Miami, where he eventually begins working as a personal trainer. Matt is still a full-time personal trainer, which he is also very passionate about. But about 5 years ago Matt started wakeboarding and also went in to MIA Skateshop and bought a new setup to start skateboarding again. I guess not being able to snow ski as much as he wanted to was starting to get to him.

Apparently the wakeboarding and skateboarding also sparked Matt’s photographic fire. He bought a 20D and started taking it wakeboarding to shoot photos for trade on getting pulled behind the boat, and he also started taking it to the old MIA Skate Park (R.I.P.) to shoot. Eventually, Matt started hanging out with and shooting photos of Abe Bethel and Rene Perez at the park, which led to countless hours of watching online tutorials, experimenting, and a ton of trial and error…photography was consuming him.

As you can see from the photos below, all that time and passion has translated into some amazing photography. Matt’s skateboarding photography has been featured in Focus Skate Mag, Lowcard Mag, and FTK Mag (snagged the cover shot in the most recent issue). Matt says that he doesn’t want to make a career of photography (for now at least), he is focused on training, being a dad, and juggling a busy schedule, although he said that he is getting more and more phone calls to go shoot all the time. This also allows him to focus on shooting subject matter that he is comfortable with.

Matt shoots and skates with the MIA Skateshop team and other Miami locals on a regular basis, which keeps him involved in skateboarding. Make sure to key your eyes peeled, lots of good things to come. In the meantime, enjoy this gallery of photos, all of which really epitomize the Miami skateboarding scene. – Nicks

Check out all of Matt’s work at Matt Roy Photography

ADHD: A Cellphone Video is a project by Orlando-based photographer Mike Heikkila. The video is being shot, almost entirely with a MyTouch 4G, with some random iPhone clips scattered throughout. Look for ADHD: A Cellphone Video to be released sometime in the Fall of this year. In the meantime, take a look at the trailer here:

Being a photographer myself, I am constantly checking out other photographer’s work. There are a ton of really good photographers out there, but, it is only once in a while that you come across a photographer’s work that just blows your mind. I recently discovered Ben Kilpatrick’s photography…and, Ben’s work is definitely “Mind-Blowing” caliber. I have been wanting to do a feature on the mag from time to time, showcasing photographers, filmers/ videographers, artists, and their work, so I figured this was the perfect opportunity to start. I contacted Ben with my idea and he was stoked on it, so here we go!
The name of this new feature is “Mind’s Eye”. The “mind’s eye” was a term that Ansel Adams used to describe the ability to visualize the final image before even shooting the photograph. This type of “sixth sense” ability, I believe, translates across all disciplines of art, and is the sign of a truly talented artist. – Nicks
“In my mind’s eye, I visualize how a particular… sight and feeling will appear on a print. If it excites me, there is a good chance it will make a good photograph. It is an intuitive sense, an ability that comes from a lot of practice.” – Ansel Adams
All Photographs © Copyright Ben Kilpatrick Photography
Click on photo to view large.

My name is Ben Kilpatrick. I am from Tallahassee, Florida and have recently made the big move to New York City. If you live in Florida and haven’t skated in Tallahassee you need too. Really underrated! So many good spots, and most barely touched! I’m currently sitting in the dungeon room in my rad ass cousins apartment missing my moms amazing cooking/baking and my awesome friends back home. waaah wahhh. haha. Trio for life!

Anyways, my mom bought me a little point and shoot camera in 12th grade to take pictures of all my friends and stuff during the last few months of school. I used it a lot and really enjoyed it inside and outside of school. A few years later i decided to start saving up for a dslr and bought an entry-level canon. I was hooked. I worked overtime all summer that year and bought a few lenses and a flash. Since then I have upgraded a few times. I’m currently using a Canon 5D and 1DIII for cameras. For lenses I’m using a 10-17 Fisheye, 17-40L, 35L, 50 (1.4), 70-200L. I also have a variety pack of flashes. Dudes keep knocking over my sunpak 120j’s so I’ve just got to settle for the cheaper flashes. I have been shooting for about 4 years now.

The most inspiring person always points back to my mom. She is a damn hard worker and is extremely motivated to do what she loves. So that keeps me motivated to push myself. Eby Ghafarian (owner of Naysayer Skateboards www.naysayerskateboards.com) is another inspiration for me too. He has a ton of drive and uses his long hair and vegan powers to skate 15 hours a day, stay up until 5 am working on stuff and then sleeping for 2 hours and doing it all over again. He is not human. No lie. And then you have ill ass photographers like Bradford, Herzmann, Ying, and others. Shout outs to Tallahassee! – Ben Kilpatrick 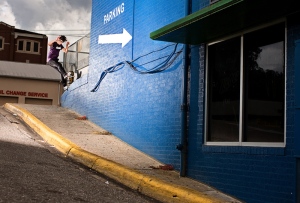 Apparently, Ben is also a naturally talented filmer as well. In his last few months being in Tallahassee, Ben compiled so much footage with his GoPro filming all of his friends that he decided to put it all togther into a homie video entitled Panhandlers. Take a look at Jerry Yates and Matt Macmillen’s parts.