Midtown Skatepark’s Clip of the Week #23 featuring Bert Wootton & Chris Blake is the best one yet…wow.

Filmed and Edited by Kevin Perez.

The very highly anticipated Daylando did not disappoint…actually, the video absolutely killed it. The new full-length from TJ Gaskill features full parts from some of Florida’s finest up-and-coming rippers: Blake Carpenter, Dalton & Kanaan Dern, Garrett Miller, Kevin Shealy, Kevin Sikes, RL Durham, Thomas Burke, Timmy Knuth, and Wyatt Woodward. The quality of the skating, filming, editing, spot & music selection is as good as it gets…you would think these kids were seasoned vets. Daylando is 50 minutes of pure shredding and 30 “Bonus” minutes of some hi-jinx type action. Support skateboarding in Florida and pick up a copy of Daylando for yourself. There is an empty spot in your skateboarding video collection where Daylando is supposed to go. – Nicks

Here is Blake Carpenter’s full part from Daylando, a new full-length from TJ Gaskill featuring some of Florida’s finest. Our copy of Daylando arrives tomorrow…look for a review of it later in the week. In the meantime, enjoy Blake’s part, it is ridiculous.

Filmed and Edited by TJ Gaskill

8103 Clothing team rider Paul Hart and RIPNDIP Clothing team rider Blake Carpenter are both finalists in The Berrics’ Bang Yoself 3. Both of these dudes are from Florida and their parts are ridiculously good, take a look below. Don’t forget to vote, the winner will be decided by a combination of Facebook “Likes” and a panel of judges from The Berrics and LRG. 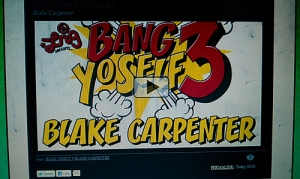 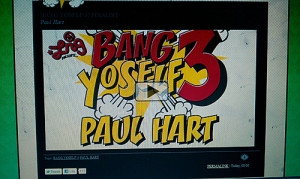 Midtown Skatepark, RIPNDIP Clothing, The High Five, and Converse team rider Bert Wootton with a Feeble to Back Lip Shove-It out on a perfect yellow rail in Orlando. This sequence was published in Focus Skate Mag a couple of months ago, but thought it might be nice to see it as an animated .gif. Photo_Stephen Knight