The Gullwing Army hopped into the infamous white van and rolled up the California coast towards San Francisco recently. They were en route to the Chili Bowl Contest and did some shredding along the way. Featuring: Shaun Ross, Poptart, Keith Baldassare, Connor Getzlaff, Andrew Mercado, and more…

Nick Matlin | Five on That Edit

Nick Matlin still rips…Recent footage for Five on That.

MIA Skateshop team rider Brian Delatorre is now riding Habitat Skateboards. Could this dude skate any faster? Brian’s got one of the sickest styles out.

Strangenotes went on a Field Trip to the Exploratorium with Jimmy Lannon and a bunch of the other guys from the Paradise Wheels crew. 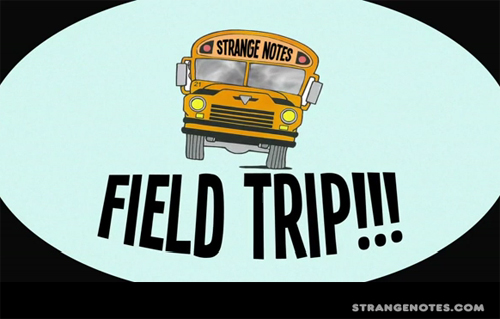 As of the end of January, 2011, the legendary San Francisco street skating spot, “Hubba Hideout” is no more. “Hubba Hideout” was located near Justin Herman Plaza on The Embarcadero (EMB).  The infamous skate spot got its name originally because of the fact that it was kind of hidden away (hideout) and the term “hubba” was a popular slang term for crack cocaine. The fact that the spot was hidden made it a favorite for local vagrants who wanted to partake in illegal activities such as smoking crack. Ironically enough, but not surprising, is that the police didn’t start patrolling the area until skateboarders started skating the ledges back in the early 1990’s. Although, apparently most of the time you could skate there for hours on end and never get harassed by the police…maybe just a couple of crackheads. Today the term “Hubba” is synonymous with that type of ledge as an obstacle, whether it is skateboarding, BMX, snowboarding, etc.

Over the past two decades there have been some really insane tricks put down at “Hubba Hideout”. Wade Speyer had the first ever documented trick on the world renowned ledge, which was a crooked grind that appeared in Thrasher Magazine in 1991 and was photographed by Bryce Kanights. Since then, skateboarders from all over the planet have pushed themselves to the next level to get a sick trick down “Hubba Hideout”. Most notable are Carl Shipman’s frontside bluntslide, which appeared on the cover of Thrasher Magazine in January of 1994, Fred Gall’s switch frontside 5-0 (Thrasher Magazine cover, February 1995), Karl Watson’s frontside noseslide 270 out, Kris Markovich’s backside 180 nosegrind, Pat Duffy’s kickflip noseslide, and of course, Eric Koston’s backside noseblunt slide (Transworld Skateboarding Magazine Photo Annual Cover 1998). 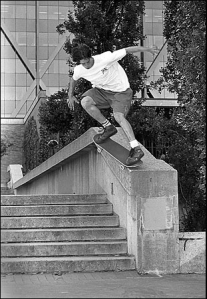 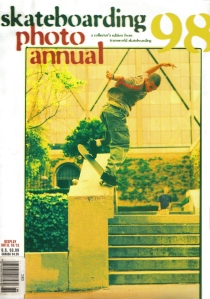 Over the years, as the number of skateboarders sessioning the spot grew, the city of San Francisco made attempts to render the ledge unskateble. Originally, skatestoppers were installed, only to be removed by persistent skaters. Most recently the brick landing at the bottom of the stairs was completely removed only to have skateboarders once again defy their efforts by using sheets of plywood as a temporary landing. Regardless, the spot is now officially gone, but the mass amounts of video and photographic documentation are now evidence of a very vital part of the history and progression of skateboarding. Take a few minutes to check out the videos below from several years back about the first 10 years of “Hubba Hideout”.

This past Thursday I had intended to do a Time Capsule Thursdays: R.I.P. Hubba Hideout, obviously it didn’t happen. I was in Bradenton for 4 hours attending the DDA meeting regarding the new Bradenton Skatepark, and just ran out of time. The piece will be up on the mag next Thursday, but in the meantime, check out this Transworld Skateboarding Magazine Photo Annual cover from 1998. This is, in my opinon, the gnarliest trick that was ever done at Hubba Hideout…Eric Koston BS Noseblunt Slide!

Well, it’s official…Hubba Hideout is no more. Take a look at this article over at ESPN about this legendary San Francisco skate spot. Check back on Thursday for a Time Capsule Thursdays: Hubba Hideout.